It’s taken me a while to work up to writing my last USA-based post.

Since arriving back in Australia and stepping back into my everyday existence, I’ve experienced some…let’s call them ‘adjustment and re-acclimatisation issues’ encompassing a range of emotions, including rage, disbelief and irritation at the characteristic rudeness exhibited by Sydney wankers (I was gone for three weeks – three weeks – and the wanker population here seems to have exploded. Did someone feed them? I told you, DON’T FEED THE WANKERS AFTER MIDNIGHT OR THEY TURN INTO HIPSTERS!).

Not to mention some good-old, post-trip existential angst; what are we doing here? Why are we not living on a donkey ranch? This time two weeks ago I was hiking through the ancient chasm of the Grand Canyon and contemplating the infinite stretch of time compared to the insignificant flash that is a human life; now I’m writing ads designed to sell mass-produced, obesity-promoting snack foods to families with the absurd promise that eating them will ‘elevate their mundane social occasions’. WHY AM I HERE WHEN THERE’S NO SAUSAGE GRAVY?!

I think the awesomeness of a trip is directly proportional to the misery you feel upon your return to everyday reality. But then, one of the best things about time spent travelling is the way it allows you to slip out the back door of your own life and contemplate where it’s going from a distance  – and you really do see  more from there than when you’re in the midst of it, buying eggs and setting alarms and having meetings and catching trains.

However, all this angst came long after our visit to San Francisco, where we ended our travels and said farewell to the USA. But to get to San Francisco we had to drive what felt like 5 hours on what felt like a 20-lane highway with what seemed like several thousand of the most alarmingly useless drivers on the planet. Or maybe Californians are born without a frontal lobe or a normal person’s innate fear of death – I don’t know. What I do know is that driving our rented convertible through a stampede of hormonal Velociraptors would have felt less risky in terms of the insurance excess.

Despite the odds, we managed to make it to San Francisco in one piece at around midday on Monday the 10th. By the time we’d said goodbye to silver Bumblebee (the Camaro – I never did get a full-frontal photo of it) and schlepped out of the Alamo rental depot, hanger had reached danger levels. So we caught a cab to our final hotel destination – Hotel Boheme in North Beach- and checked in before heading straight for the Italian restaurant downstairs, where we consumed a barge-load of carbohydrates. I’m talking garlic bread, followed by GARLIC FRIES – topped off with an entire salami pizza.

And that, my friend, is what happens when you eat cafeteria gruel for breakfast in Yosemite followed by a nail-biting, snack-less 5-hour drive across California. You try to kill yourself with carbs. But still – GARLIC FRIES. Crunchy, salty, tongue-titillating, hanger-placating garlic fries. San Francisco introduced me to them and my arteries will never be the same.

After lunch and our subsequent return to being reasonably nice people, we decide to take a short walk down Columbus Avenue to the Bay area, and see if we can spot the Golden Gate Bridge.

Our short walk turned into a 15-kilometre round-walking-tour of San Francisco. We briefly cruised Fisherman’s Wharf before getting the tourist-trap willies and walking further on around the shoreline through Fort Mason and the Marina District. One major observation: Joggers. I have never seen so many people jogging as I did in San Francisco. Cycling was a close second. Before too long we found ourselves a nice little beach with a view of the Golden Gate Bridge – not the best view, but a view. The best view would have required an additional 10km walk and our legs were starting to feel it.

Despite our aching calves, we decide to walk back to our hotel. We toy with the idea of a cab but dismiss this to instead walk up the steepest back-breaking hill we can find. It was punishing – actually more difficult than walking up the Grand Canyon. I found myself wondering how people could live here and do this every day, and then it occurred to me: they don’t, because they’re not masochistic idiots – they take the tram. The silver lining (aside from the pre-dinner cardio workout) was that we got to see loads of those iconic Queen-Anne-style San Franciscan homes, which were quite impressive and made me feel like I was walking around on a movie set. 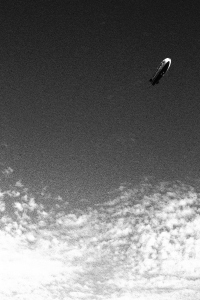 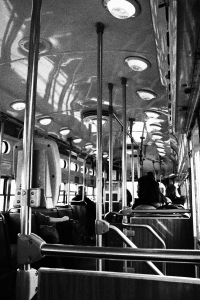 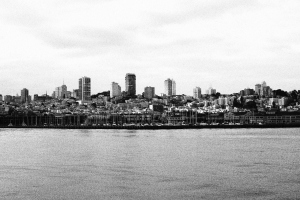 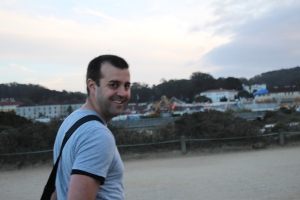 We finally made it back to our hotel and rested our weary legs for an hour before heading out for dinner. The guy at our hotel (who I’m 87% sure was called Kevin) pointed us towards a nearby restaurant in Chinatown called The House of Nanking. 87%-Kevin tells us that it’s his favourite Asian restaurant (after nearly three weeks away from Sydney we’re gagging for some good Asian food) and it’s usually packed out with tourists and locals alike.

He’s right. It’s packed. But somehow we manage to walk in just as a single table for two is vacated, which is lucky because my legs are actually refusing to hold me up any longer without some sort of delicious reimbursement. We quickly peruse the menu and order fried shrimp packets, fried pork egg rolls and the Famous Nanking Sesame Chicken with steamed rice. We order the egg rolls because I have a hunch that they’re actually the USA version of spring rolls – and I’m right!

My legs were exceptionally happy.

We’re due to board our flight home the late the following evening, which leaves us just enough time the next day to go to prison; namely, Alcatraz.

Should you have the opportunity to visit Alcatraz, I highly recommend you pre-book the first-thing-in-the-morning tour. You’ll still end up shoulder-to-shoulder on a ferry packed with other tourists, but when you arrive at Alcatraz you can breeze straight up the hill (unless you’re an imbecile incapable of basic directions and etiquette, you can skip past the ‘mandatory briefing’ they give tourist groups upon arrival)  and walk straight into the audio tour area (the old cell block) without any queues or tourists from previous sessions still swarming the place.

I was a bit sceptical when I heard about the audio tour, because previous audio tours I’d done throughout Europe and the UK had been fairly underwhelming. But the Alcatraz audio was awesome. It’s documentary-style storytelling done by former Alcatraz inmates and guards, which takes you through the history of Alcatraz, the famous criminals who did time there, the failed escape attempt and subsequent bombing of the island during The Battle of Alcatraz in 1946, and the amazing story of three inmates who escaped Alcatraz Shawshank-Redemption-style in 1962, never to be seen again. They either drowned in the strong currents of the San Francisco Bay, or they actually managed to successfully escape Alcatraz and got as far away from San Francisco as possible. They were probably gangster jerks, but I naively still hope they made it – if only because it’s a hell of a story.

We walked around the exercise block, the cells, the prisoner dining room and briefly entered ‘the hole’ – one of Alcatraz’s completely dark solitary confinement cells. I don’t know much about prisons, but Alcatraz certainly wasn’t the Hilton. After a few hours we made our way back to the pier, where 4 million other tourists were just arriving (dear God book the first tour of the day) and jumped on the boat to head home.

As in – actual home. Sydney-home. We left San Francisco after lunch and made our way out to the airport. Barely 24 hours later (it actually seemed like no time at all because for the first time ever I managed to get a decent night’s sleep on a plane – 8 hours sleep on a 13-hour trip!), we touched down in Sydney, where it was a delightful welcome-home temperature of 34-degrees Celsius.  And even I have to admit – existential angst is a lot easier to deal with when it coincides with the start of a Sydney summer.